Protection of Dundas Valley Deer and Ecosystem Neglected by Officials 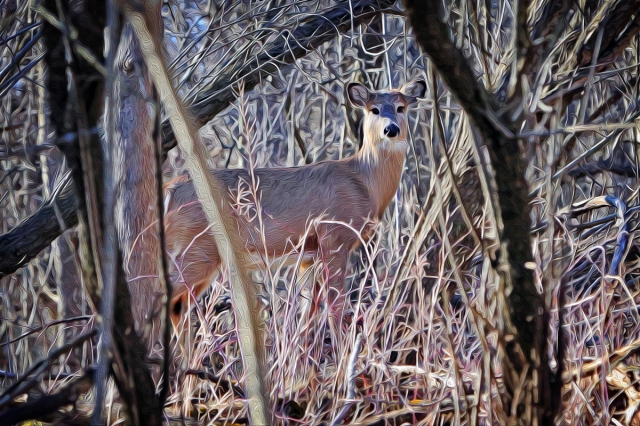 The white-tailed deer, a unique feature of Dundas Valley, deserve our help, consideration, and compassion. The peak in their population has been recorded in 2009-2011. After 2011, their numbers have been consistently declining. Today, you can hardly spot them. They are not present in places, where they could be seen every night, just a few years ago.

We were told that there was a deer overpopulation in the area. Perhaps back then, but not today, not anymore. We were told that one of the reasons for their local overpopulation, overgrazing, and related traffic hazards was the fragmentation of deer habitat. Yet, new development and construction are continuing in places that used to be protected as deer crossings, deer corridors, deer yards, deer shelters, and deer feeding areas. Something has changed, something bad is happening. Are the builders and the rich land owners bribing our officials? Perhaps this is why we see the efforts to eradicate deer from the Valley – to make room for more monster houses that can generate more profit, more political donations and more personal bribes? Or have we simply become ignorant and indifferent?

We were told that there was nothing we could do to prevent the annual deer hunt taking place in the Dundas Valley Conservation Area. This hunt continues, even though the deer overpopulation is no longer an issue and the so called Nanfan Treaty has been proven to be a historical hoax and legal fraud.

It looks as if the people responsible for protection of our conservation area decided to kill and eliminate the deer in Dundas Valley altogether. This is happening regardless of the protests and complaints by local residents and taxpayers. It is time, again, to address this problem and to seriously look at the facts:

It has just come to my attention that another “Monster House” is being built NW of the intersection of Governor’s Road and Weirs Lane, behind the 975 Governor’s Road property. The location of the construction, that started last fall, is surrounded by conservation lands managed by the Hamilton Conservation Authority, and as such, is an integral part of the Dundas Valley ecosystem.

According to the neighbours,

“Property owners next door are building a monster home behind us, after receiving Niagara Escarpment Commission and City of Hamilton permission to do so.  However, they have ignored many of the conditions that were imposed on the development.  This has resulted in the destruction of a “protected” area – a naturalized, sheltered meadow, formerly used as a busy deer yard by local wildlife. (A document that summarizes and illustrates the situation is attached here:
Lax Agency Enforcement  is Putting Dundas’s Natural Environment at Risk – PDF ).

Initial complaints and calls for NEC and City enforcement regarding un-approved tree destruction were ignored.  As a result, construction fencing around the “protected” zone was not installed as specified, and demolition activity moved into the deer yard area itself, destroying it.  Now, heavy-duty fencing – not approved in any plan – prevents deer from using essential, decades-old wildlife corridors through the forest.”

Who do you call, when law enforcement agencies and other regulatory bodies refuse to act and do their job? Where do you complain to stop violations of official permit limits, when the agencies that established those limits don’t want to act in a timely manner that could prevent the destruction of the protected ecosystem?

It is time to demand that our city’s planning department, the Hamilton Conservation Authority, the Niagara Escarpment Commission, and the Ontario Ministry of Natural Resources take conservation of Dundas Valley wildlife and natural habitats seriously.

With respect to the deer hunt, we demand that our government stops playing politics and starts showing historical and legal integrity. Regarding the development and construction permits, it seems that the sole logical and possible reason for such a neglect could only be corruption. As the old saying goes, “Money speaks”. But not only money. When you have the builder and the land owner who both own large local businesses and are golf buddies, and when these businesses contribute large amounts of money to the election campaigns of local politicians, then we have a real problem. That’s where the law stops. It is unacceptable. It is criminal. It must end.

Let’s face it. I don’t see any other reasonable or rational justification that would make our officials close their eyes on an obvious destruction of the Dundas Valley ecosystem and on obvious building violations.  This matter should be investigated and followed by law suits and disciplinary actions. We will not allow the conservation in Dundas Valley to be compromised. Enough is enough!!