Review: Environmental impact of the outdoor ice rink located at the Sanctuary Park in Dundas

Following our meeting with the Parks Superintendent for the City of Hamilton, a review of environmental impact of the outdoor ice rink located at the Sanctuary Park is to be conducted in the spring.  In the absence of a formal environmental assessment, this review will provide information for  future decisions regarding this project.

As noted earlier, the Sanctuary Park in Dundas is very unique. It is administered by the City of Hamilton and has an official status of a city park. At the same time, ecologically, it constitutes an integral and inseparable part of the Dundas Valley Conservation Area and its fragile ecosystem. It provides natural habitat on which deer and other local species of wildlife depend on. For years, deer have been regularly feeding here at night, especially in fall, in winter and in early spring.

This review reflects our concerns in the following areas:

Deer adjustment to the new structure and new lighting

Last fall, deer have been seen feeding at Sanctuary Park every night. After the repair of the security light, located on the eastern wall of the maintenance/washroom facility, deer discontinued entering the park’s grounds. The security light, facing east, covers a significant part of the lower soccer field as well as the field located east of it, including three out of six entry points used by deer in the past.

Initially, it was difficult to determine whether deer would adjust to the presence of the new security light. With the implementation of the outdoor ice rink, two powerful floodlights, facing north, were added to the existing security light, facing east. These lights covered the entire lower soccer field, (where the ice rink was located), NE part of the higher soccer field, and the area between the two soccer fields. They also spilled into the fields to the east and into the forest along the northern and eastern edges of the park. Together, the three lights covered most of the area where deer used to feed in winter and in spring, as well as most of the entry points available to them. 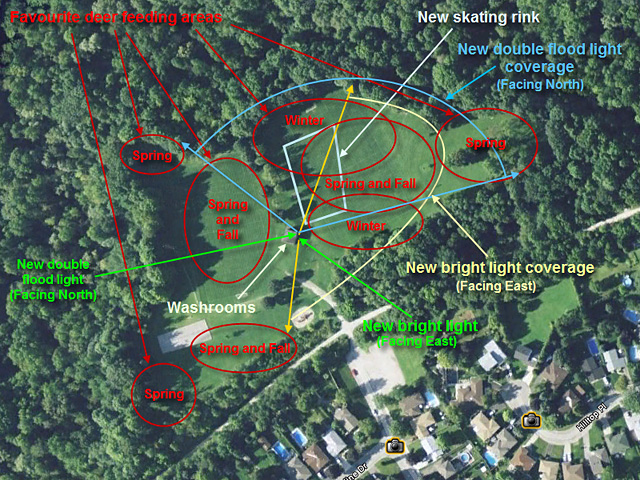 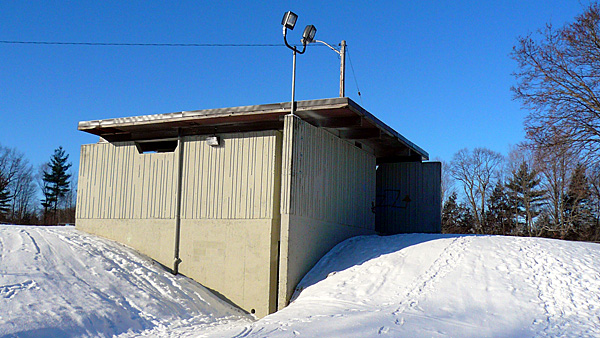 The maintenance/washroom facility with the new lights

In previous years, deer were regularly feeding in the lower soccer field, located east of the maintenance/washroom facility. This is where the new ice rink was placed, last winter. Although it would be impossible for the deer to reach the grass through the ice surface, it was the light pollution that kept the deer off the park’s grounds.

Where the following nine pictures were taken. No flash light was used. 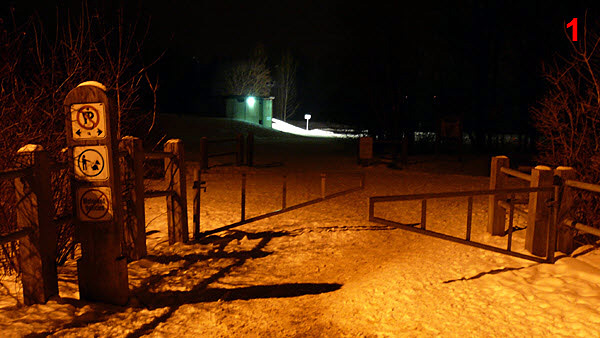 Pic. 1 – North, from the end of Sanctuary Road

Pic. 2 – North, from the entrance to the park

Pic. 3 – The northern end of the lower (eastern) soccer field

Pic. 4 – Area between the soccer fields, north of the maintenance/washroom facility 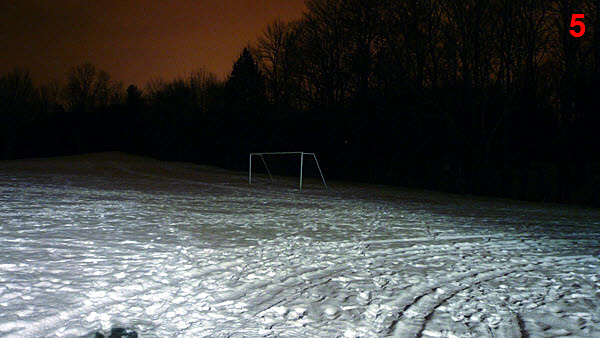 Pic. 5 – The southern end of the lower (eastern) soccer field 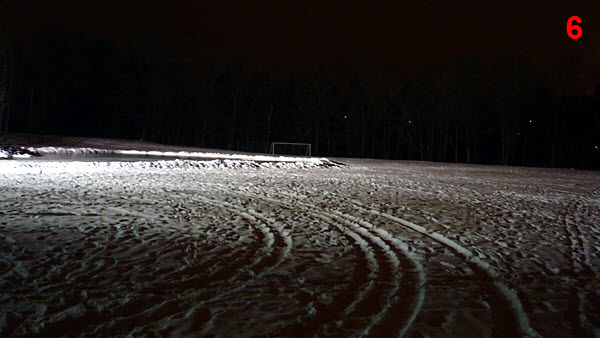 In December and early January, very few deer attempted to approach the park. Deer tracks were found infrequently in the forest just north of the park’s grounds and to the west, along the Rail Trail. However, unlike in previous years, no evidence of deer entering or feeding in the park was found. By mid-January, deer stopped approaching the park altogether and no deer tracks were found in the wooded vicinity of the park until the end of February.

Pic. 9 – This deer approached the park from the south-west (it actually came along the Rail Trail), observed the park for a few minutes, and returned back to the forest.

Instead, an increased number of deer began to feed in the surrounding residential areas, especially north of Pleasant Avenue, along Skyline Drive and up to Green Meadow Way. In February, more deer were also seen night-feeding along Glen Crescent and Sunrise Crescent, with a few herds coming from the north and reaching as far east as the intersection of Pleasant Avenue and Old Ancaster Road.

Since February 26 (after the first meltdown), deer began to approach the park from the west. After the floodlights were taken off the timer, deer started to enter the dark parts of the park, first at its west end, and later, along the northern edges of both soccer fields. Until today, deer were not found feeding in southern parts of both soccer fields, in the areas regularly frequented by them in previous years. They also stopped using the southern and eastern entry routes. This is mainly due to the re-introduced security light that faces east and stays on all night.

In conclusion, while deep snow and cold temperatures might have kept deer away from open areas this last winter, we do know for certain that the main reason for the absence of deer at the Sanctuary Park was the new lighting. Both in January and February, deer were frequently seen feeding at night in similar open areas, such as the fields surrounding the Trial Centre, the fields along the eastern part of the Sawmill Trail (NE of the parking lot), the fields east of John White Trail, the fields at the Canterbury Hills Camp, the Merrick Orchard, the fields around the Groundhog Hill, and the open agricultural fields on the north side of Mineral Springs Road west of Binkley Road (across from 1488 Mineral Springs Road). Deer activities at the Sanctuary Park stopped exactly at the time the lighting was introduced, and partial deer activities resumed precisely after the flood lights were taken off-line. The remaining security light is still keeping the deer away from the southern parts of the park.

Damage to the turf after a prolonged ice cover

We are still evaluating this. The full growing season has not  arrived yet, and it is difficult, at this time, to say how soon and to what extend the grass that was previously covered by the ice rink will regenerate.

After the ice first melted down at the end of February, it appeared that there was no damage to the grass. The grass under the ice was well-preserved and even greener than the grass around the ice surface. However, as the time passed by, it became apparent that the ice cover had damaged the turf and had negatively affected the ability of grass to regenerate. Much of the grass that was under the ice surface has died off and patches of sand are visible throughout this part of the lower soccer field. The grass outside of the ice rink is healthy, thick and green.

The pictures shown below were taken on January 21, March 21, April 5, and April 14. We intend to continue monitoring the condition of the grass in this spot. New pictures will be added on bi-weekly basis. Click on the pictures to view the enlarged originals. 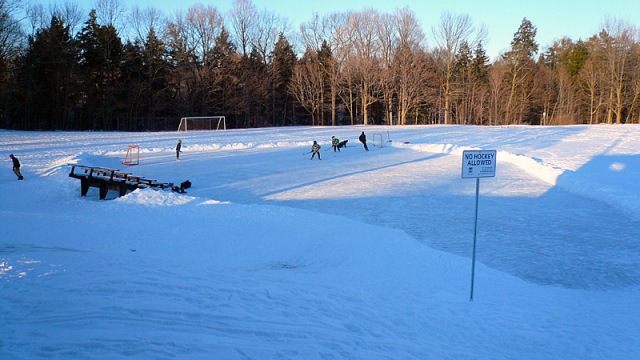 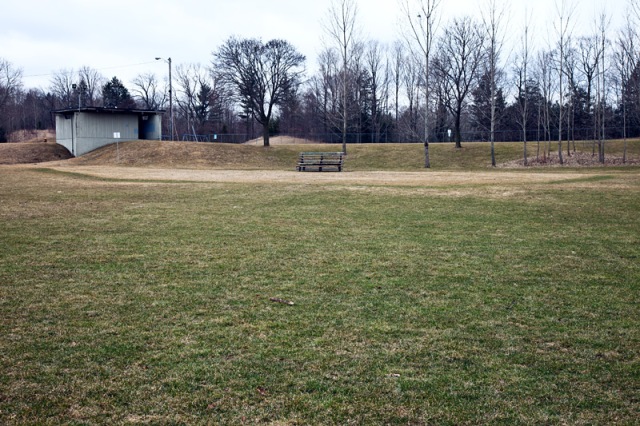 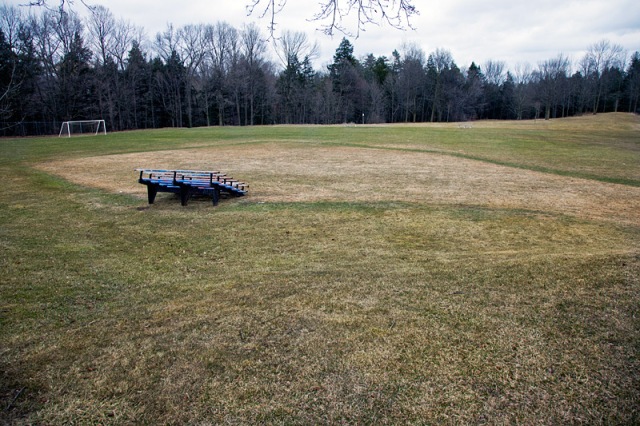 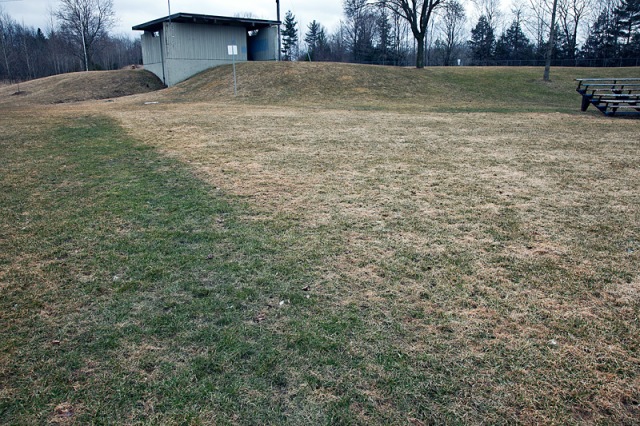 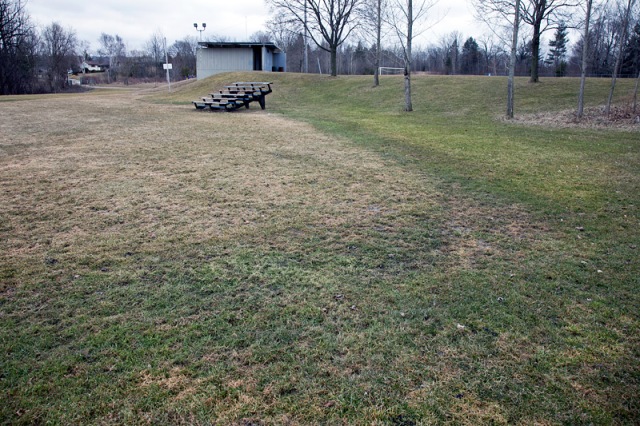 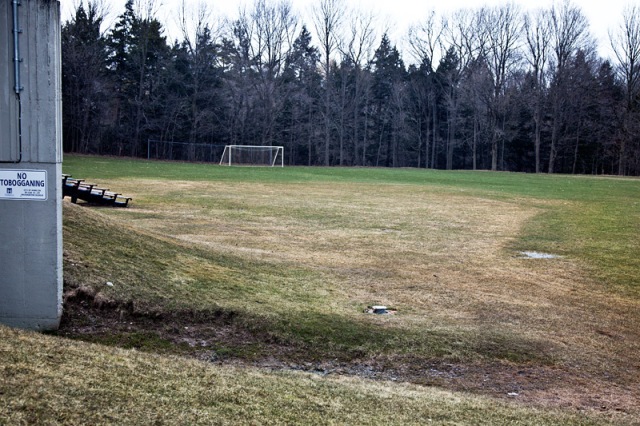 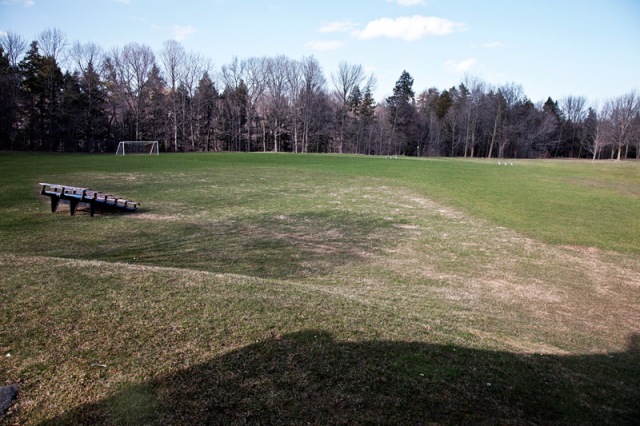 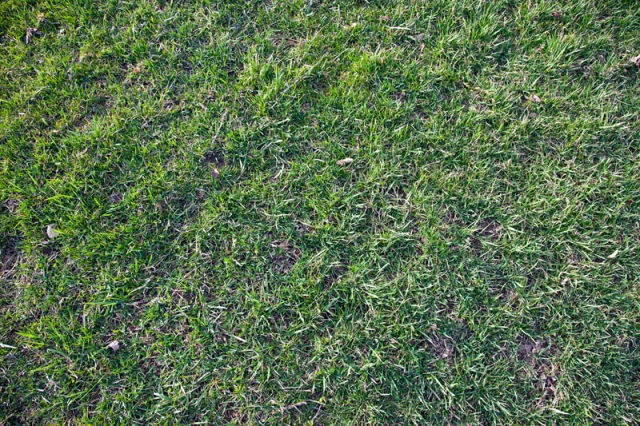 Healthy grass outside of the ice rink area

This entry was posted in Sanctuary Park. Bookmark the permalink.