Posted on September 4, 2011 by lechbiegalski

Although Princess Point and the Desjardins Recreation Trail are not parts of the “Dundas Valley proper”, they remain connected to it ecologically and recreationally.

In this article, we would like to address some serious concerns expressed by many Hamiltonians who frequently use the city’s recreational areas. These concerns point to the changes introduced recently by the City of Hamilton and the Royal Botanical Gardens to the Desjardins Recreation Trail’s entrance point located at the bottom of Longwood Road, namely, the Princess Point entrance.

The Desjardins Recreation Trail starts at Princess Point. It runs along the Cootes Paradise and the Desjardins Canal. It is then extended by the Hamilton Harbour Waterfront Trail. There are two access points at the ends of this trail system, the Princess Point Entrance and the Bayfront Park entrance.

In fact, every night, the City of Hamilton Public Works Department’s truck and workers pass through the entire length of these trails, including all parking lots, to replace garbage bags and provide regular maintenance of the parks’ facilities.

The parking lot at the Bayfront Park entrance is public and free of charge.

So were the parking lots at the Princess Point entrance, until the City of Hamilton introduced new restrictions.

Although the Desjardins and Waterfront Trails, as well as all parking lots at the access points, were built by the City of Hamilton – with the taxpayers’ money – as one publicly owned recreational complex, the western parking area at the Princess Point entrance has been recently excluded from free public use.

The parking facility at the Princess Point entrance consists of parking areas A, B, and C, area A being the smallest (space for six cars only).

…while the territory administered by the City of Hamilton extends to the East. 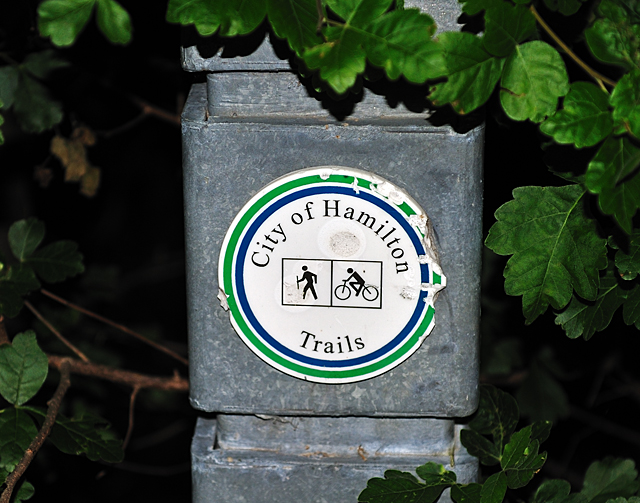 Even though most people use the Princess Point parking area in order to access the Desjardins Recreational Trail, they are now forced to pay a parking fee that is enforced by the Hamilton Parking Authority…

…and collected by the Royal Botanical Gardens.

Curiously, parking lot A has been recently designated and marked as parking for disabled only.

It happens to be the closest to the Dejsardins Trail entrance.

(It also is the furthest from the RBG territory and from the ticket machine, located between parking B and C.)

Parking spots for the disabled are usually the closest to the destination. This clearly indicates that the Pay @ Display system introduced here was intended for the many users of the Desjardins Recreation Trail rather than for the few visitors of the Royal Botanical Gardens area located further to the west.

The concerns regarding this arrangement are as follows:

It seems that a review of the legal and rational basis for this arrangement is badly needed. From the taxpayers’ point of view, the present arrangement is unacceptable. As one elderly gentleman commented, “I am not going to pay it, I haven’t seen my taxes go down.”

On September 6, 2011, we received the following email in response to this article:

Thank you for your email and detailed assessment regarding parking at Princess Point.  The parking facilities at Princess Point are under the ownership of the Royal Botanical Gardens and it is solely their decision to require payment for parking on this land.  The City of Hamilton involvement relates to servicing and collecting of revenues from the equipment, on behalf of the RBG.

I have taken the liberty of passing your email on to the RBG for response.

So far, no response from the RBG was received.