(This article was originally published is September of 2017. It is still actual and pending a just solution. Unfortunately, our local politicians do not represent the best interest of the voters and taxpayers anymore.)

Yesterday, I walked along one of my favourite hiking trails that begins at the entrance to the Dundas Valley Conservation Area (DVCA) located at the end of Lions Club Road. I have done this for at least three decades.

Cars have always parked at the end of the Lions Club Road. A small parking is, or rather was, located just before the entrance to the wooded area. It did not bother anybody, as this was the very end of a gravel road and there was no through traffic and no residences around or pass that point.

There was no parking prohibition along, or at the end of the Lions Club Road, with the exception of a short, about 90 meters long stretch west of the entrance to the Canterbury Hills Camp.

Former “No Parking” zone (red) along the Lions Club Road, prior to this year’s changes.

Now, we have “No Parking” signs along the entire length of the Lions Club Road, including the old parking area at the end of the road. Why this change? What happened? There is no objective justification for it. There is, however, a very clear explanation.

The Hamilton Conservation Authority (HCA) did not like the fact that people were just walking into the woods, after leaving their cars outside. Since last Fall, they have constructed a new parking lot, inside the conservation area. They have placed barriers and fee collecting machines at the entrance. Simultaneously, the City has implemented parking prohibition along the Lions Club Road in order to force people to use the paid HCA parking service.

Lion’s Club Road does not belong to the Hamilton Conservation Authority. It is a public road, built and maintained with the taxpayers’ money. The parking prohibition was not dictated by any traffic related necessity. Since the parking fees at the DVCA have increased at least threefold within the last several years, this  was a significant money grab by the HCA. The City should have stayed out of this, instead of turning a public road into a tool increasing profits of the HCA at the expense of the taxpayers.

One can say, “If you want to enter and use the conservation area, you should pay for it.” It would make sense, if the entrance fees applied equally to all visitors. This, however, is not the case. According to the HCA policies, people walking into the area don’t have to pay entrance fees. Only people coming with cars have to pay. With the introduction of no-parking zones around the entrances to the conservation area, the city has effectively excluded those of us who live further away from entering the DVCA trails on foot. While nearby residents can simply walk to the conservation area and enter it for free, other Hamiltonians have to pay for essentially the same recreational opportunity. This is a wrong solution. I suspect that it is also illegal, as it favours some people and discriminates against others. [“Favour: – support that is given to one person or group and not to others, in a way that does not seem fair.”] The result? Segregation of the citizens and discrimination based on the location of their residences.

And what about those taxpayers who just want to park there without entering the conservation area? Why should this opportunity be eliminated? Isn’t this a public road?

This is not an isolated example. I have seen the same parking prohibition signs along Hamilton’s public roads surrounding other facilities and areas maintained by the HCA. 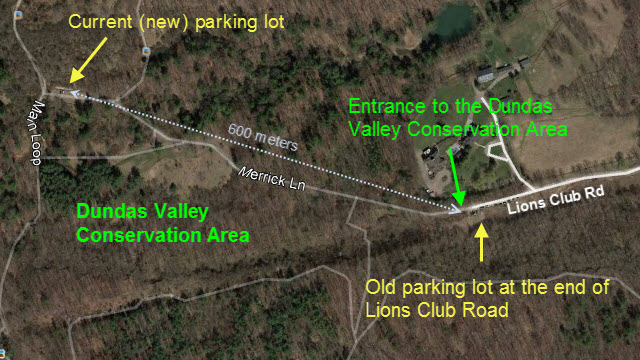 Finally, I want to point to one more aspect of this situation. Dundas Valley Conservation Area is not large. It is merely 8 km long and, on average, 3 km wide. Due to the presence of wildlife and due to its unique ecosystem, it has always been protected from intrusion of development and traffic. This protection has now been compromised. Following its desire to make more money, the HCA has built a new parking lot inside the boundaries of the conservation land, in the forest located 600 meters from the entrance. This is bringing traffic, noise, and pollution to the very heart of the area’s ecosystem and wildlife habitat. It is a solution that contradicts the mission and stated goals of the HCA.